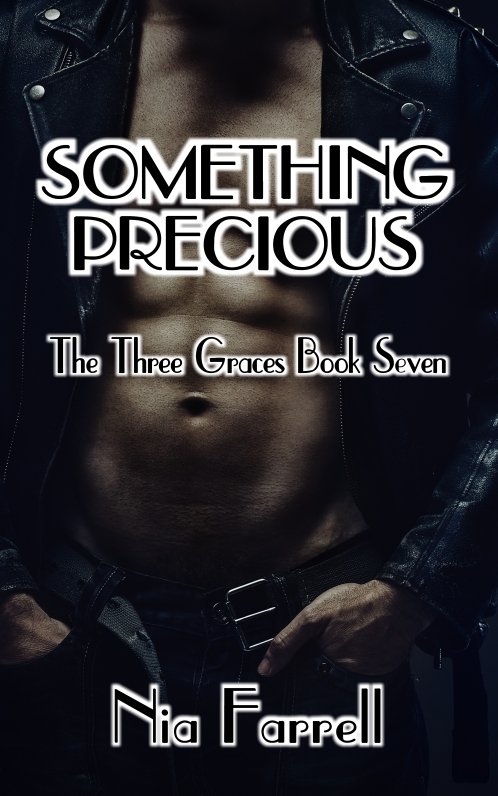 Something Precious (The Three Graces Book Seven) by Nia Farrell

Rachel Givens aka Rae Simmons has post-rape PTSD and a three-year-old autistic daughter, father unknown.  A blood test will hopefully answer the question of paternity.  Chances are, Hannah belongs to Cord.  Whatever the results, the Colson brothers won’t rest until Rachel remembers what it was like to submit to them, to be shared by them.  Two men love her, and they’ll do whatever it takes to win her back and be a family.

“Just what I said.  Hell, Cord.”  He runs a hand through his hundred dollar haircut and slaps the steering wheel as he drives.  “Look, I heard about someone matching her description.  I hired someone to confirm it.  She goes by Rae Simmons now, but it’s her.  I didn’t tell you because you were too close to getting out.  I wouldn’t have put it past you to make a run for it, once you knew where to find her.”

I rub my temples, struggling to process what he’s telling me and all that his news implies.  Rachel—our Rachel—is alive.  It’s a goddamn miracle.  But no word to let us know?  She let us fucking believe that she died?  We loved her.  Her death ripped out our hearts.

She ripped out our hearts.

All this time, I’ve been blaming the Blackwater Demons MC.

Cam is calm enough, I want to punch him, shake him up.  But then, he’s had more time to deal with this.  “Think, Cord.  Remember the security camera footage?  They took her from her house.  She was probably afraid they’d come for her again.  Hell, she might still be afraid.  Right now, we need to think about how to approach her.  We can’t let her run again.  We’ve got to let her know that it’s safe to come home.”

I take a deep breath and let it out slowly.  Two more, and it starts taking the edge off my anger.  “So where is she?”

“Some little hick town named Posey.  Its claim to fame is a couple of diners that have been featured on TV.  Rachel is a waitress at one of them.”

Déjà vu.  I almost smile.  Rachel worked in an ice cream shop when we met.  She had planned to go to college and be a nurse.  I guess all that changed when she “died.”  Now she’s waiting tables and goes by the name of Rae Simmons, the other girl who was taken.

The girl we buried in Rachel Given’s grave.

“How far?” I ask, not that it matters.  I’d go to the ends of the earth to see Rachel again.  The fucked-up part is not knowing what’s going to happen after that.  She was taken because of me.  She suffered because of me.  She’s been living a lie for four years, and she’s about to be slammed in the face with reality.  The truth is, I want her regardless.  I don’t care about the past.  I don’t care about who she’s been with in the time that we’ve been apart.  Well, I can’t let myself care, anyway.  I.  Just.  Can’t.

There’s too much at stake.  For the first time in years, I feel… alive.  I feel… hope.

When I was told that she’d died, it felt like the biggest part of me left with her.  I went through the motions, not caring what happened.  I went where I was directed and did what I was told.  The club was my life now that Rachel was gone.

I missed her.  Dear God, I missed her.  I took flowers to her grave and let myself shed the tears that no one else should see.  I got angry, with God, with that fickle bitch Luck, with Rachel, for not being here, for leaving me alone.  On the worst nights, I drank myself to sleep.  I became an animated, hollow shell of a man.  I existed.  Nothing more.  But now… the part of me that found her, that knew her and loved her… it’s back.  Resurrected.  The fracture line is still there, but I’m praying it will heal in time.  The only chance I have at any kind of life worth living is a second chance with her.

Rachel opens the door.  We follow her into the living room.  It’s an older home, probably built in the forties or fifties, with dated fixtures and painted over wallpaper.  Good bones, though.  A fixer-upper if you’re handy, and I am.  Her furnishings are worn but the space is clean, neat and tidy except for a pile of building blocks abandoned near a three-shelf bookcase that’s filled with children’s books and DVDs.

My heart seizes when I realize her child is old enough for blocks and books and animated films.  A sense of urgency grips me, and I look for her.  Rachel’s daughter.  There’s a little girl lying under the coffee table with her eyes closed.  Her hair is the color of mine and Cam’s—and now Rachel’s since she dyed it.

“Have a seat, guys.”  Rachel points to the sofa.  “Just watch your feet around Hannah.”

Thanks to Cam’s lack of communication, I have questions that won’t wait.  “How old is she?”

“She turned three on March twenty-second.”

My jaw tightens, and I rub the back of my neck beneath my ponytail.  She’s quiet now, stopping short of disclosure.  She’s going to make me say it, make me ask the question whose answer I may hate to hear.  Rachel was taken, held by men with no mercy and an agenda.  The timeframe is so close.

I swallow, hard.  My voice is rough with emotion when I ask, “Is she mine?”

My words are like the crack of a whip, reopening wounds that clearly haven’t healed.

Rachel can’t bear to look at me.

She glances at my brother and drops her gaze to her lap.  “Probably.”

Holy mother of all—

I’ve been so focused on the enemy without I never considered I might need to look closer to home.

I almost snort.  He knows as well as I do what happened that last time we were together.  It was fucking Fourth of July weekend.  Three days, spent mostly in bed.  I was preoccupied with club business, about to leave, heading out to set up the Lost Creek MC safehouse, getting ready for the war that we feared was coming with the Blackwater Demons MC.  Cam was only too happy to distract Rachel while I packed.

We’ll be having more than words later, I fucking guarantee it.  Son.  Of.  A.  Bitch.

Cam bristles, still rejecting the idea that he might be a baby daddy.  If he is, he’d better man the fuck up.

“Enough!” she hisses.  “You will watch your language, or you will leave.  She’s not Cam’s.  We never… we didn’t… We were never together without you.”

I say nothing but inside, I’m feeling this weird mix of relief and hope and trepidation.  Cam’s tastes run toward mouth and ass.  I don’t remember him dipping his wick in Rachel’s pussy more than once or twice if that.  But there are others.  The ones who kidnapped her.  Who brutalized her.

Monsters, they took what was ours.

Rachel draws a deep breath.  And another.  She looks at her hands.

We can’t.  Not yet.  I’ve spent four years mourning her loss and I’m not walking out of here without some answers.  She might not know who fathered Hannah, but she sure as hell can tell us why she let us think that she was dead.

The pain in her voice cuts me like a knife.  “You don’t want to know.  You won’t want to hear it.”

She throws up her hand, putting any conversation on hold.  Loading a DVD in the player, she glances at Hannah and motions for us to follow her into the kitchen.  She starts the exhaust fan over the stove before turning to face us.

Christ, the look on her face.  The innocent girl we knew is gone.  This is a woman who has clearly been through hell and back.

“They.  Took.  Me.”  She spits the words, full of bile, at me.  “They stole me from my house, and then they took me.  Do… you… understand?  For two nights and three days.  At least one of them had your coloring.”  She looks at the coffee table, where her daughter is hiding.  “Is she yours?  Who knows, really?”

Her words strike me like brass knuckles, landing hard enough to strip away any pretense, beating me down and leaving me feeling exposed and vulnerable.  The harsh truth is, she didn’t say anything that I haven’t thought to myself.

Still, hearing it from her lips is wrenching.

I feel the color drain from my face.

Jesus, I don’t know how she can sound so cavalier, watching the blood pour from the holes her words have ripped in me.  She’s right.  I don’t want to listen, but hearing this is part of my fucking penance, punishment for not protecting her.