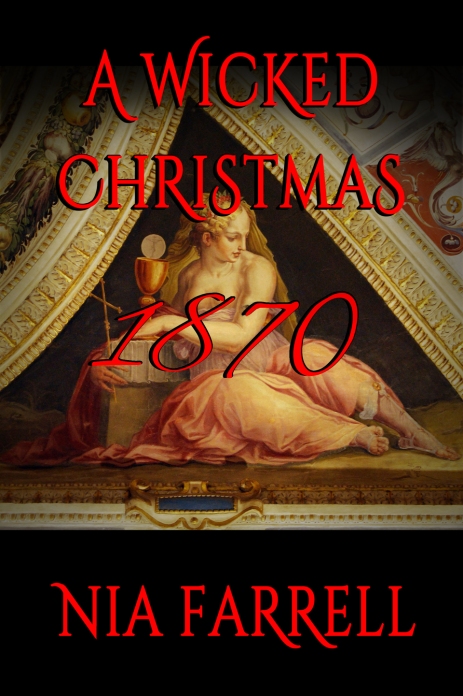 In this holiday novelette, sculptor Elena Davenport Wainwright prepares to celebrate her art studio’s second open house and her third Christmas with her husbands Edward Wainwright and Daniel O’Flaherty.

While working on her larger-than-life statue of Achilles, Patroclus, and Briseis, a fainting spell sends Elena tumbling from the scaffolding.  Daniel breaks her fall, but the episode makes them all wonder at the cause.  The doctor lists a number of potential suspects, including bone break fever, parasites, and a baby.  The possibility of contracting a disease is as disturbing as the possibility of pregnancy, but how will Elena know?

Maybe she should call in her Romani herbalist for an intuitive medical consultation.

Although written as a standalone, your enjoyment will be enhanced if you have read As Wicked as You Want (named one of The 50 Best Indie Books of 2016, voted #1 erotica and #10 overall) and A Wicked Christmas 1869, a sizzling holiday short story.

Lucy helped me into the striped blue silk dress that was Edward’s favorite and arranged my hair, coiling it at the back of my head and securing it with pins and a pair of jeweled dragonfly combs.  Adding pearls at my throat and a pair of earbobs, my transformation was complete.

Daniel was waiting in the hall to escort me downstairs for dinner.  Edward’s cook Babs had outdone herself.  The soup was savory.  The beef was fork-tender, the vegetables were tender-crisp, and dessert was to die for.

Paddy had two servings.  I envied him his constitution.  He could eat all he wanted and never gain a pound of fat, only muscle.  But then, he worked hard, too.  At the studio and in the morning regimen that the three of us maintained.  Sculpting was a very physical pursuit.  My work required me to be as fit as a field hand.

The men, of course, were great admirers of my form.  They could not wait to take me upstairs, undo all of Lucy’s work, and get me naked as Venus rising from the sea.

Edward hooked my wrapper on his finger, found the shoulders, and held it open for me.  He might be a hedonist, but I drew the line at traipsing nude through the halls when Young Frank’s duties included tending the attic boiler.  Babs’s son was an affable, dependable, impressionable young man.  I did not wish to frighten him away.  If he chose to stay in our service, no doubt he would get an education.

Tonight, there would be no corruption of his youth.

The three of us wore robes to the third-floor room that Edward had transformed into an indoor sexual park that we referred to as our play room.  Here, we played hard and fucked harder.  Our Master’s collection of “toys”—instruments and aids—was ever increasing.

As soon as the door closed behind us, I shrugged off my wrapper and dropped to my knees.  Daniel did the same, taking his place beside me.  We waited, wordless, to see what Edward desired.

Tonight, it was both of us. 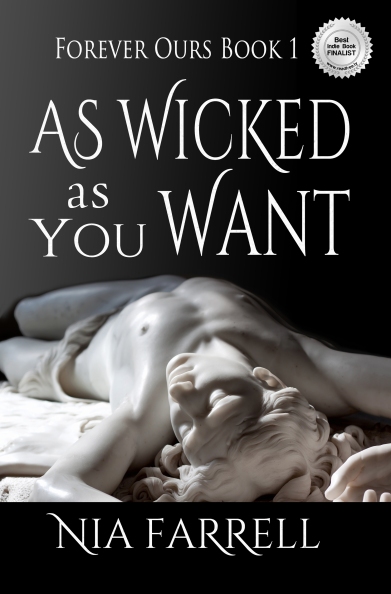 Blurb: Elena “Lane” Davenport is a struggling artist who’s been living as a man since the Civil War.  Suffering from “soldier’s heart” (PTSD), facing arrest for failing to officially muster out, Lane is about to lose everything when an offer of help comes from the most unexpected of places.

Edward Wainwright is a British history professor—and Lane/Elena’s stepbrother.  A dominant man with forbidden passions, he comes to America with news of their mother’s death and finds himself twice tempted.  There’s instant attraction between Lane and Edward.  Reclaiming her true gender to slip past the Pinkertons should make things easier…except Edward wants both Elena and her studio assistant Daniel O’Flaherty.  He hopes that Daniel will eventually submit to him, but they’ll need to learn—when it comes to Elena—just how much Daniel is willing to share.

Three soulmates are destined to find each other.  Chance brings them together.  Will Fate tear them apart?

“What was that?” I rasped, my voice an octave lower than normal. I’d been a vocal partner, urging him on, begging him to finish, yelping when he accidentally hit a sore spot, crying his name into the mattress when his curled fingers hit another, sweeter place.

I arched a brow.  “Then they have misnamed it,” I muttered in the same language, earning a smile from the good professor.  “Pardon me if I don’t reserve judgment, but there was nothing little about that.”

Edward smiled, indulging me.  “You are correct.  There was nothing little about that.  You were magnificent, my dear.  Responsive beyond my expectations.”

I rolled on my side to face him.  “Beyond your expectations?  You mean to say, it’s not like that every time?”

He arched a curious brow.  “Hardly.  I take it your other partners have pleased you equally well.”

“Edward,” I said solemnly, “I’ve had no other partners.  Remember, I asked you to teach me?”

He stared at me in disbelief, as if I were some strange creature, never before catalogued, that had wandered into his camp and made myself at home by his fire.

I attempted to lighten the mood.  “If you’re going to make free with my body, then I reserve the right to ask questions.  It’s only fair.”

He rolled onto his back and buried his face in his hands.  “My God.  What have I done?”

“Nothing that I did not want, or refuse to stop,” I told him.  “I wanted to know what pleased you, and it was my choice to submit.  Come, I’m not a child.  Disregarding when your fingers fucked me senseless, of course, my eyes have been wide open.”

“Edward.  Edward.  May I remind you that I had a brother with friends until the war divided them?  And that I served three years in the company of men who loved to brag of their conquests and adventures?  Admittedly, I can still be shocked—I mean, what the New Moneys want still boggles my imagination—but surely by now you’ve realized that I am no fragile Miss.  Granted, I shall strive to be proper in company, but when it’s the two of us alone, in private, behind closed doors, well, eventually I hope to be as wicked as you want.”