And that’s not all. There’s a $50 Amazon gift card up for grabs, but you’ll have to go to the original post on Facebook and follow the instructions. Good luck! 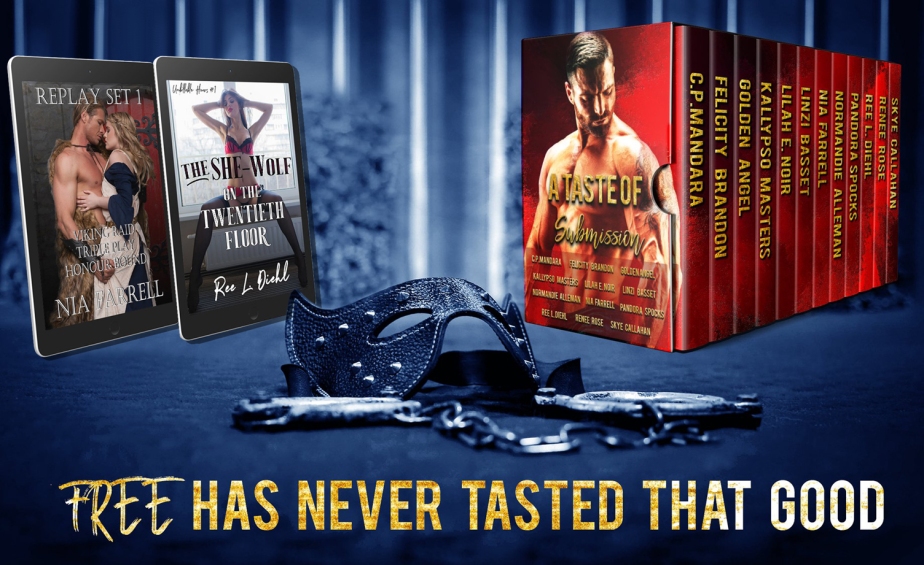 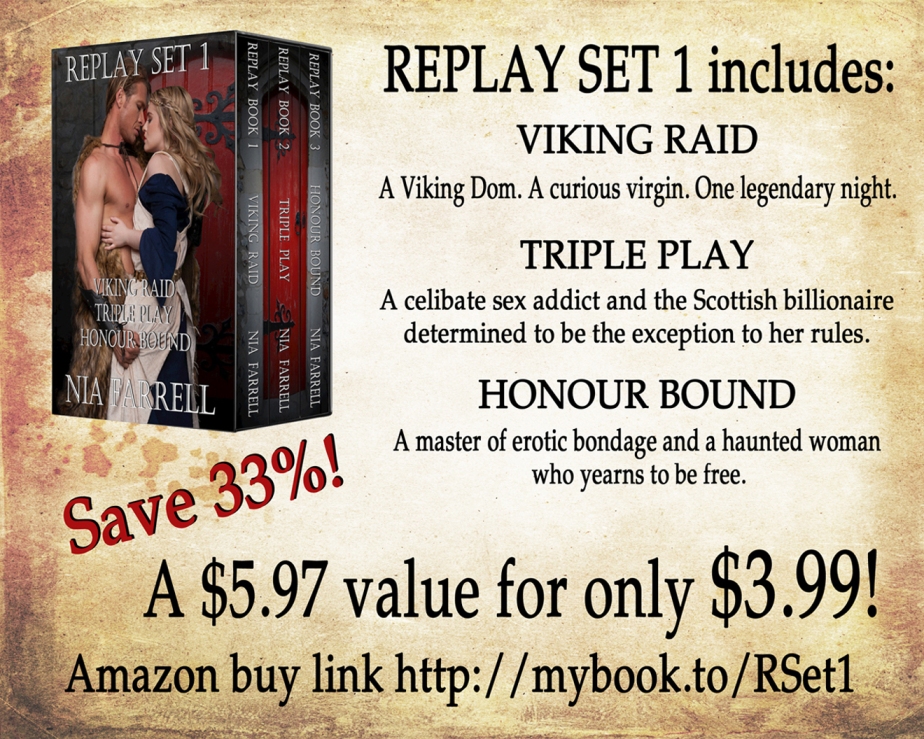 Gunnar isn’t looking for a permanent sub, but he’ll take what Breanna is offering—only because he can’t stand the thought of another Dom claiming the beautiful blonde harpist. Her music enchants him. Her innocence beckons him. She’s agreed to give him everything, but will one night be enough?

TRIPLE PLAY  Rowena Campbell has always been the naughty twin.  After the Viking Raid and her worst walk of shame ever, she recognized that she was misusing sex.  In therapy for her sexual addiction, three months celibate, Rowena is better than fine, with a successful erotic blog and book deal by her alter ego, ginger-wigged Regina Wright.  When Scottish billionaire Micheil MacDonald wants Regina at his brother’s birthday party, she agrees to attend three scenes as an observer only.  A triple play in Imperial Rome, Prohibition Chicago, and Lewis Carroll’s Wonderland, no kink, no sex – and no lies, per his terms, with half a million dollars riding on the line.  Surely she can manage that?

Micheil MacDonald is a widower with a child recovering from the fatal accident that claimed his wife.  He sweeps into Rowena’s life like a force of nature, brushing aside her protests, determined to be the exception to her rules.  But Rowena has scars that no one can see.  Secrets that have never been shared – not even with her twin.  Telling the truth was never supposed to be this hard.

“Piers and Eleanor, what a love story.  I loved this story of a damaged lady and the dominant Piers that helped her to heal and give into love and submission…Nia Farrell is a fantastic writer.  I’m a lifetime fan.” 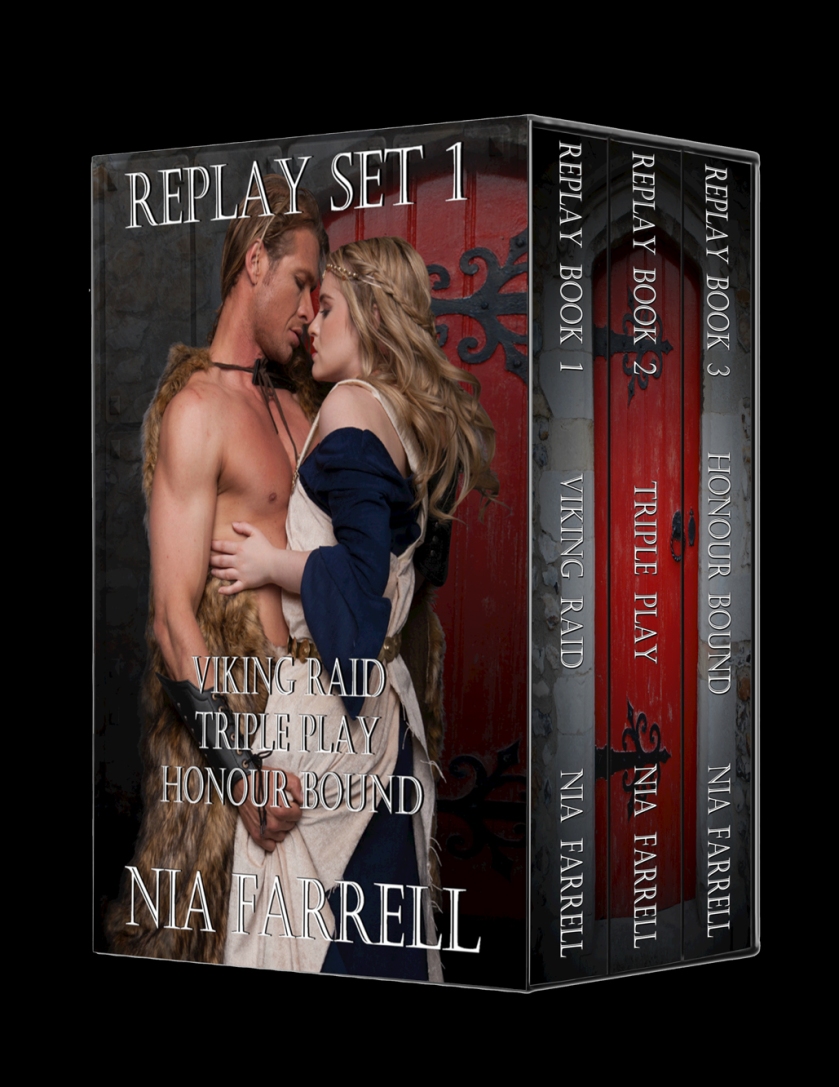 Twitter is exploding with promos.  Check out their blog page for this and other great reads. 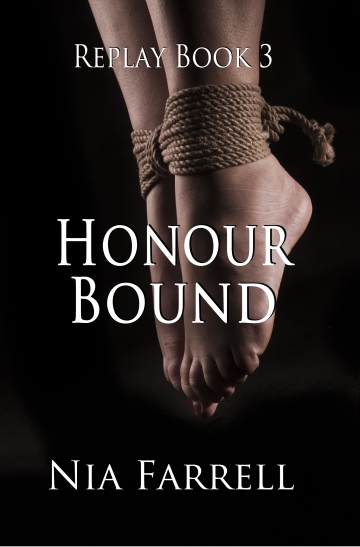 For a moment, Elly imagined lying naked in Piers St. Leger’s arms, still in a state of bliss after a session of kinky play.

The timbre of his voice birthed a flash of kinky fantasy.  She envisioned Sir Piers with a soft, suede flogger, administering lashes that raised her to the point of ecstasy and rendered her nearly unconscious, releasing her bonds and holding her against him, ear pressed against the carved width of his chest, soothed by his heartbeat, safe in the circle of his arms.

The thought made her mouth dry and her panties even wetter.

The Dom behind the desk inhaled slowly, deeply, as if he could smell her arousal.

She crossed her legs and told what was between them to behave.  She was here to watch, to take notes, she reminded herself.  Purely clinical.  When she saw those chiseled lips start to slide into a knowing smile, she knew it was time to make things perfectly clear.

She squared her shoulders and leveled her gaze at him.  “Mr. St. Leger,” she said crisply, noting his displeasure when she failed to address him as Sir.  “I confess, my past partners – with the exception of one – were about as vanilla as they get.  But I am also a psychologist.  I’m not coming to Replay to – ”

Thankfully, she caught the get corrupted before it tumbled off her tongue.

The look that he gave her made goose flesh cascade down her arms and alarm bells sound in her head.

“Vanilla.”  He tasted the word but refused to swallow it.  Why would he, when there were so many other flavors that he could choose from?

Elly felt as if she’d been judged and found wanting.  Oddly enough, that stung more deeply than it should.

“Should you ever wish to expand your horizons…”  He tapped the contract.  “We have several Dominants here who train submissives – collared, claimed, and unclaimed.  Compatibility, trust, mutual goals…there are any number of factors used to determine the best pairing, one that will protect and nurture a submissive’s growth.  As a bottom, you may view this document as… ephemeral, but I can assure you, I shall view it no differently than if you had come to me for training.  What we do here, I take very seriously.  Very seriously, indeed.”

“Yes.  One night.  And how many research projects have you completed in that time, hmm?”  His lips angled in a knowing half smile, like the great and powerful man behind the curtain enlightening the girl who’d landed in a strange and foreign place.  “If you wish to observe and ask questions, to learn and begin to understand…well, it will very likely take more than an evening in Wonderland.  In fact, I can almost guarantee that you’ll be left wanting.”

In more ways than one, she suspected.  If Piers St. Leger seated at a desk was enough to make her wet, how the hell was she going to survive an evening by his side, watching God knows what and depending on him to dissect it all in a play-by-play that might have her praying for overtime?

It wasn’t often that Elly was wrong, but she’d misjudged Piers St. Leger.  He might not like the idea of vanilla her, but there was no mistaking that he wanted a taste of it. She knew it the minute that she signed the contract, leaning on his desk, close enough to smell him.  Clean male and subtle musk, with a nuance of patchouli on his clothes and wintergreen mint on his breath.  She’d initialed all the pages, adding her signature to the last.  Catching her bottom lip between her teeth, she’d risked a glance up at him and was stunned by the sudden heat that flared in his eyes – eyes that seemed alive with possibilities.

“Sir Josef will take you to your wardrobe appointment,” he said, keeping his gaze on her, a dark promise in his eyes, in his voice, that made her shiver.  “I shall see you soon, princess.”