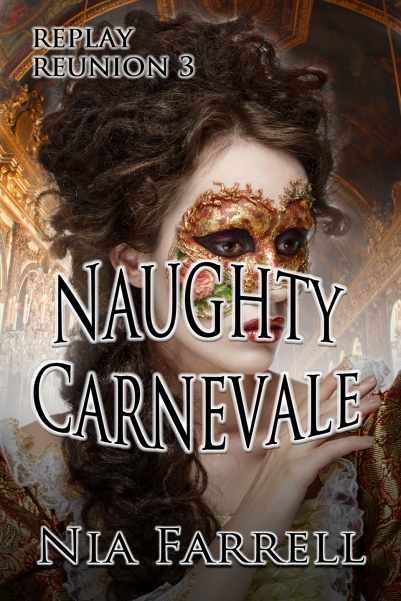 A photojournalist caught trying to enter Replay under an alias learns her lesson under a Dominant congressman.

The Dominant assigned to Mikaela Roberts knows exactly who she is, but Congressman Devon O’Rourke has no idea why she’s here. After years of investigative reporting, Mikaela has come to learn the truth about herself. But first, she’ll have to prove herself to her temporary Dom, and that may prove as hard as resisting her growing attraction to a man who wishes that she was anywhere but here.

Sir Declan led her to the shaped metal cage suspended in the corner over a drain grate.

He opened the door and made a point of looking inside it. “Mask on. Clothes off,” he said smoothly. “An hour in here, then it’s twenty strokes with a crop.”

“Thirty,” he said, daring her to say something more.

Public humiliation followed by corporal punishment. She was never so grateful for her mask. If she was lucky, no one witnessing her shame would recognize her. No one but the congressman from Utah would realize how turned on she was right now, knowing that he’d have to help her undress, that he’d be watching every inch of skin that she exposed. That he could touch her anywhere, anytime he wanted with his large, strong, capable hands.

“Armand!” he called, motioning to one of the wardrobe assistants who’d been watching the rock star get flogged. “She’s ready.”

Adding to her indignities, the congressman delegated the task of helping her disrobe to a man who had no interest in women. Armand undressed her, removing layer after layer until the only things left were her wig and her mask while Sir Declan watched, his expression inscrutable.

“Come,” he said, sounding too damned pleased with himself.  “Bend over the spanking bench.  Good.  Now stay while I fetch some oil.”

She closed her eyes, jumping when she felt his hand on her bottom.  Spreading her cheeks, he drizzled oil down her crack then pressed the plug into place, working it in and out as if testing her ability to take it up the ass.

Like being plugged and put on display for everyone to see.  It was a far sight better than being gibbeted or put in an iron maiden.

He pushed the plug firmly into place and tapped the end.  Her greedy pussy wanted more.  Hot, swollen, her vulva throbbed and her vagina clenched, squeezing out juices that trickled down her thigh.

Naked as she was, there was no hiding her arousal.  The air was thick with her musk and her nipples felt hard enough to cut diamonds.  He stood over her, watching her, gauging her reactions.  Satisfied, he ordered her to follow him back to the cage in the corner.

The stone floor was surprisingly warm beneath her feet.  Mikaela realized that Sir Piers had built it with radiant heat beneath it so submissives were less apt to get chilled.  The room was warm enough for nudity, which might explain why some of the Dominants were stripped to the waist while they did scenes with their subs.

“In you go,” Sir Declan ordered, holding the cage still for her to step inside.

Mikaela felt a twinge of panic, realizing that she’d just drunk water and shed her clothes.  There’s no way that she could last an hour in a basement cage without making a mess of things.

She tried to warn him.  “Sir, I need to visit the ladies’ room.”

“Forty,” he rumbled, showing neither mercy nor patience with her when he pointed to the floor drain and she realized why it was there.

Prophetic or not, forty minutes later, her humiliation was complete.

She kept her feet as far apart as she could, braced against the curve of the walls, the tide of emotions swelling inside her.  Embarrassment.  Resentment.  Anger.  Lust.  The plug in her rectum only made it worse.  She wasn’t the only one suffering.  Sir Declan was hard and huge, his reaction clearly visible beneath his tights.  Whether it was strictly for her or a response to everything taking place in the dungeon, she didn’t know, but they were both in need of release.

If she was lucky, by the time Carnevale ended, she would win his trust and earn his cock.

Links to be added

A naturally submissive American woman is paired with a Dominant prince at a fantasy resort’s grand opening.

Club Paradiso is a fantasy resort owned by the Paradiso Luxury Resort in partnership with Replay resort in the States.  Located on a privately owned island in the Caribbean, Club Paradiso caters to the rich and decadent.  Its invitation-only grand opening has drawn royalty, nobility, heads of state, and pop culture personalities from around the world.  At the top of the guest list is Estefan Gianopoulos, crown prince of the Kingdom of Varra and the world’s richest bachelor, thanks to a gemstone unique to his tiny Balkan country.

The trouble is, nearly every woman at the party is wearing a fashion classic and none of them looks like the red-headed woman he hired.

He isn’t happy when his escort for the evening turns out to be a brunette in need of an attitude adjustment.

“Kira,” he murmured.  “An unusual name.  Family?”  Her father was a famous Hollywood stuntman.  Her mother taught yoga, which explained that body of hers.

“N-no,” she croaked, watching in rapt fascination as he adjusted himself.

A ten-inch missile was coming her way as soon as he could figure how to do it without causing an international incident.

“My parents were anime and sci-fi fans,” she explained.  “They named me after Akira and Kyle Reese from The Terminator.”

He arched a brow and silently applauded their tastes.  No cookie-cutter name for an Olympic-level shootist who’d trained in multiple martial arts and provided personal protection for rock stars, actors, billionaires, and dignitaries.

He knew basic self-defense and was an expert fencer but given all the black belts she had to go with that deliciously sinful black dress of hers, he realized that she’d let him disarm her.  Had let him take her purse.  She had willingly surrendered her power, knowing she could stop things at any time.

Exactly what a submissive would do.

“I’m going to remove your holster.  It’s tearing up your skin.”

She rolled her eyes.  “And where am I supposed to put my gun?”

Unbuckling the holster, he pulled it free of her body and laid it aside.  Tearing open the foil pack, he pulled out the alcohol pad and turned back to see that her knees were shut as tight as a miser’s purse.

He looked pointedly at her reddened thigh.  “Legs apart, pet.  I’m going to swab you down, then doctor you up.  I need room to work and you’re not giving me any.”

“Damn straight,” she murmured, glaring at him, daring him to force the issue.

Two could play that game.

He gave her his best Dom look.  It had worked before.  It worked again.  The minx grit her teeth and growled at him before grudgingly moving one leg far enough to afford access to the entire site.

Estefan nodded his approval.  “Good girl,” he hummed.  Leaning over her, he swabbed the reddened patch of skin with alcohol.  Breath hissed between her teeth at the sting.  He dipped his head and blew on her thigh.

He did it again, as an experiment, to see what she would do.  She shivered and tightened her hands into white-knuckled fists, denying the urge to push him away—

Or pull him closer?  The scent of feminine musk was mistakable.

“Once more,” he rasped, wishing like hell that third times actually were charms.  To have this woman submit to him would be his greatest triumph.

She bit back a moan and spread her legs wider.

“There now,” he crooned, pleased with her response.  “That wasn’t so bad, was it?  Where your skin is broken, I can’t use arnica cream to promote healing.  I’m going to blend petroleum jelly and triple antibiotic cream to use.  Plain petroleum jelly will keep it from scabbing and scarring, but I don’t want it to get infected.  Are you allergic to anything?  Are those going to be safe to use on you?”

She rushed to correct her slip but it was too late.  He’d heard it and she knew it.

“They’re fine,” she whispered hoarsely, disturbed that she’d shown her hand instead of keeping her cards close to her cleavage.  She wanted him to think that she was unaffected, but her body had betrayed her.  Her jade eyes had grown smoky and languid, her cheeks were flushed, and the scent of her arousal was thick enough to bottle.