Teasers and Excerpts at http://bit.ly/RB5WP 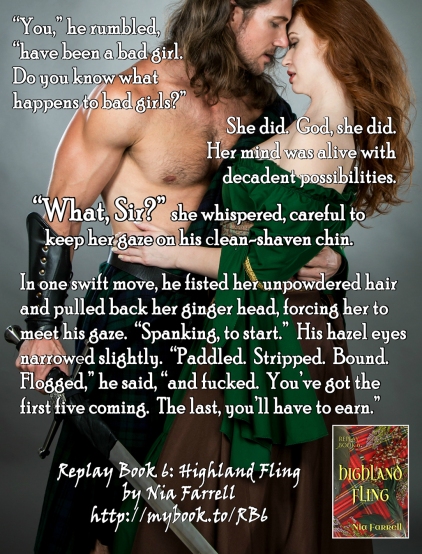 If you haven’t checked them out, you don’t know what you’re missing – Cover Reveals are promoters extraordinaire. Highland Fling was released May 1 and featured at Cover Reveals on May 2 @ https://coverreveals.blogspot.com/2017/05/highland-fling-by-nia-farrell.html 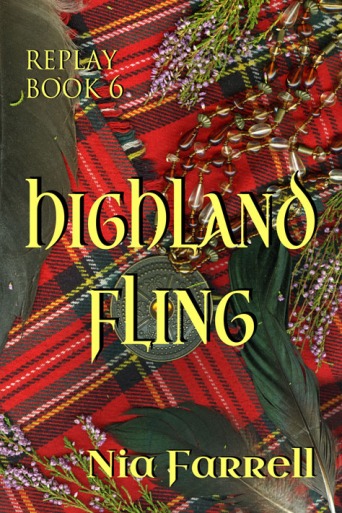 Dominant Ian McGregor can’t believe it when he sees Jannet MacDonald waltzing in the Replay’s Versailles Room.  At her brother’s wedding, she let him think that she couldn’t dance.  She might have shut him down that night, but he hasn’t stopped thinking about her.  And now, she needs to pay the price for not telling him the truth.

Ian isn’t the only one she’s wronged.  Replay staff psychiatrist Sir Josef wants to punish Jannet, too.  When he was approving her for play, she detailed her history of eating disorders but failed to disclose her anxiety.  At the céilidh, Ian proposes that they decide the matter like men did back in the day…with swords.

Jannet hopes that Ian will win the challenge, even if it means being disciplined.  Once, he gave her the best sex of her life.  This time, she’ll have to earn it—the hard way.

Intending to rejoin the rest of those listening, Jannet turned and found her way blocked by a wall of velvet-clad muscle, dressed in period finery.  Ian McGregor caught her right hand in his left and stretched their arms out to the side.  Sliding his other hand around her waist, he pulled her closer to him than was necessary.  Or maybe it was.  There was no way that she could slip free, not without making a scene.

Then again, why would she, when she’d dreamt of being in his arms and she was finally here?

Sir Josef was an adequate partner.  Ian commanded the dance floor.  Commanded her.  He led her through increasingly difficult waltz steps, demanding her submission, bending her to his will.  Dipping her low, he pulled her upright and guided her through a sequence that had her craving more.

She was so screwed.

“Thank you,” she managed when the music and their movements had stopped.

Lowering their arms, he released her hand and placed both of his on her waist.  Just the feel of him sent delicious shivers rippling through her.  And his smell…tantalizingly, utterly masculine and oh, so tempting.

“You,” he rumbled, “have been a bad girl.  Do you know what happens to bad girls?”

She did.  God, she did.  Her mind was alive with decadent possibilities.

“What, Sir?” she whispered, careful to keep her gaze on his clean-shaven chin.

In one swift move, he fisted her unpowdered hair and pulled back her ginger head, forcing her to meet his gaze.  “Spanking, to start.”  His hazel eyes narrowed slightly.  “Paddled.  Stripped.  Bound.  Flogged,” he said, “and fucked.  You’ve got the first five coming.  The last, you’ll have to earn.  What say you, eilidh?”

Eilidh.  Red doe.  Hearing the pet name in her native Scots Gaelic made her even wetter than she was.

“Good girl.”  Bending down, he bit her ear, then whispered into it.  “When the music ends, your backside is mine.”

Her body threatened to pool at his feet when he let her go.  Nodding, Ian headed over to talk to Sir Piers and his wife Eleanor, nearly five months along and clearly showing.  Somehow Jannet managed to make it to a chair and sink down onto it.  As much as she enjoyed hearing Aubrey Wolfe play, she couldn’t wait for the performance to end.

This close.  She was this close to learning what submission would entail.  What a Dominant would demand.

Just how much she could take.

She’d been nervous about submitting to a virtual stranger.  Sir Piers had a reputation for pairing partners, but still.  This was her first time here—or anywhere.  It was her first experience, and Ian appeared well-versed in the lifestyle.  He could have easily chosen another play partner, versed in protocol and trained to please.  She did not want to disappoint.

Forty-five minutes later, Aubrey finished and rose to a round of enthusiastic applause.  Sir Josef kissed her, then took Mr. Vashon by the neck and pulled him close for an equally passionate kiss.

“Ready?”  A familiar baritone voice sounded behind her.

“Your choice,” he said.  “Here in public, in a private playroom, or in your suite.”

“Playroom,” she answered.  She wasn’t ready for an audience, and it was a little too soon to invite Ian to her room.  If things didn’t work out, she would need neutral space, free of his scent and any physical reminders of what happened between them.

Rounding her chair, Ian held out his hand and helped her from it.  Maintaining his hold, he led her away from the scene that continued to unfold around them.  As much as she was tempted to ask, Jannet knew better than to beg him to stay.  There was always tomorrow, she reminded herself.  An outdoor venue with pipes, drums, and kilts seemed a perfect setting for a newcomer to observe the action and satisfy at least some of her curiosity.

It seemed like they walked forever, down the labyrinth of halls and up two flights of stairs.  Taking a key from his pocket, Ian unlocked the door to Room 7, twisted the handle, and swung the door open wide.  Jannet stood, rooted, feeling her stomach knot and her anxiety kick in.  It wasn’t too late.  She didn’t have to do this.

Ian pulled her into the room, shut the door, and pinned her against it with the hard length of his six feet three inch body.  Thrusting five fingers into her hair, he put his other hand over her throat and squeezed, ever so slightly.

Jannet raised her gaze, past those perfect lips, to meet his thick-lashed hooded eyes.  She watched, fascinated by the shift in them.  Any concern for her was vaporized by the flare of lust that threatened to consume them both.

“Fuck it,” he growled, and slammed his mouth down on hers.

He claimed her with a hunger that had her craving more.  Lips crashed.  Bodies clashed, locked in a desperate duel that would only end when one of them was satisfied.

Ian fisted her hair and dragged his hand down her front, curving his calloused fingers over the swell of her breast and squeezing it, almost hard enough to bruise.  She moaned into his mouth, acutely aware of just how long it had been since she’d had anything inside her other than her fingers or her favorite toy.  Beneath her layers of petticoats and panniers, she was soaking wet.

Her corset and gown were cut low enough, it didn’t take much for him to free one breast.  Breaking off their kiss, he traced the side of her neck with his tongue, then fastened his mouth over her nipple and feasted on it like a starving man.  She speared her fingers into his thick brown hair.  He caught her wrists and pinned them above her head with his left hand.  His other hand dove south, wrestling with her skirt and layers of underpinnings until he’d managed to shove them above her waist….