Dare the Wind was featured at CoverReveals on April 3rd.  Check it out! 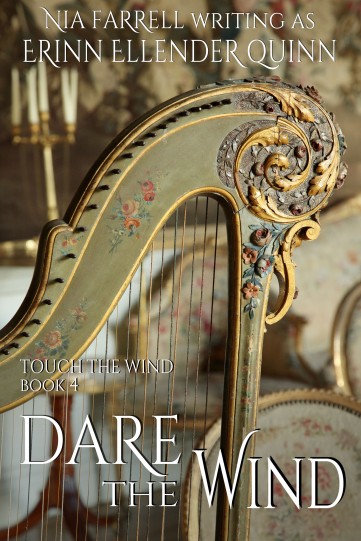 BLURB: Irish sea captain Tristan O’Dea still feels the sting of rejection when he sails to Havre with a warning of danger to his commander Justin Vallé’s family and an offer of safe passage for his half-brother and sister and their mother, once Vallé’s late father’s favorite mistress.  Expecting to find Madame Visconti, Tristan is met at the door by an artist’s model wrapped in a sheet and looking like moral sin.

Living near poverty, Vallé’s widowed half-sister Jessenia Bougeureau has been forced to pose for a sculpture.  She is living at the mercy of an unscrupulous man who holds a portion of her mother’s property as collateral for loans that they cannot replay.  So far, she and her brother Nicolai have managed to keep their mother’s death a secret from him.  Captain O’Dea’s offer represents a chance at a new life, a new world for Jess, and safety for her brother until the danger posed to their family is past.

Jess is a harpist and a composer. She hasn’t written music since her husband died.  Watching the giant Irish sea captain, with his Celtic knotwork tattoos and sculpted body, during morning exercises, for the first time in years, she feels inspired.  Rescued by Tristan, free to choose, she’s about to make him an offer that he cannot refuse.

As ucht Dé.  For God’s sake, she was every man’s fantasy come to life and here alone with him.  He was captain of this ship and responsible for everyone aboard, including her and her swordsman brother.

“First and foremost, ye’re Justin Vallé’s sister, and I swore him an oath that I would take care of ye.”

That’s exactly what Jess was counting on.

“I am a muse,” she told him.  “It’s what I do.  I inspire, with my music, with my voice, with my body.  My husband was a poet, did you know that?  He made me look him in the eye while he took my maidenhead.  He committed it to memory and described it in glorious detail in his next book.  He invited the world into our bedroom.  Men and women everywhere wanted a taste of the passion he described.  I was ashamed, and angry.  I grew tired of constantly fending off advances.  I became a recluse for a time.  Bernard lived for his art, and went to salons filled with his adoring fans.  Some were single.  Some were married.  He died in a dual with but one of many cuckolded husbands.”

Jess closed her eyes and took a breath, and let it out softly, slowly, gathering herself.  When she opened her eyes and looked at him, the Irish giant nearly took her breath away.  She’d never felt such motion in his stillness, like a coil wound tight, ready to be unleashed.

What she did next was risky, but she needed to know.  “Tell me of the vicar’s daughter.”

O’Dea rubbed his jaw, as if wondering at the wisdom of answering.  “She married the Spaniard.”

“Tell me about the vicar’s daughter.”

The Captain blew out a harsh laugh and shook his head.  “And what would ye have me say?  That I offered for her, too?  That I made her faint when I kissed her?  That she landed half naked in my arms and for months, all I could see in my dreams were small, coral tipped breasts?”  By the time he finished, he was talking through clenched teeth and was close to tossing her out.

She pretended not to notice.

He looked at her with some confusion, as if he was uncertain that he’d heard her correctly.  “What?”

“When you learned that she chose another, did you cry for her?”

“No,” he shifted, uncomfortable in his chair.  “No.  Not that it’s any of your business.”

“But it is,” she insisted.  “Anyone worth having is worth a tear or two.  If you did not cry, she was not meant for you.  She would not have made you happy.  I propose,” she said, “that we help each other.  You need to forget the Spaniard’s wife, and I need to remember what it is like to make love to a man of my choosing.  You promised to take care of me.  My question is, will you, or not?”