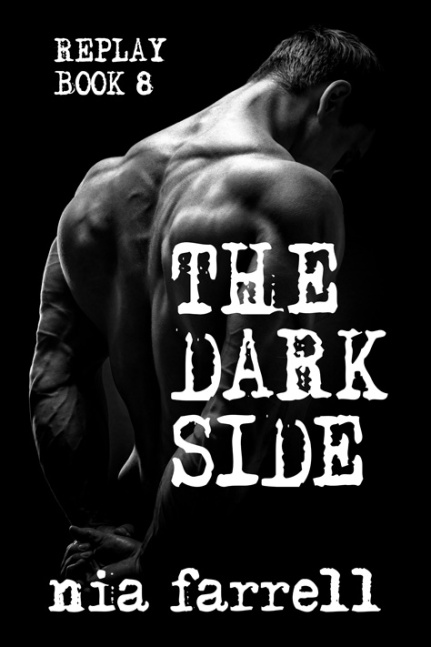 Replay Book 8: The Dark Side

Ashley invested nearly all of her savings into her first movie as a producer.  The film failed, as did her relationship with costar Cade Madden.  The only thing that’s constant in her life is the chronic pain from a severe back injury.  She refuses to use the prescription drugs that landed her in rehab.

Master Sorin (Sebastian Moldovan) is the Romanian Dominant who portrays a vampire Dom on the RACK side of the resort.  A doctor who now teaches, Sebastian is assigned to guide Ashley throughout the weekend and keep her safe during play.

In the outside world, they can never be a couple.  Keeping his job means maintaining his anonymity.  But there’s no denying their elemental attraction to each other.  When her 1930s Hollywood vamp meets his vampire, the chemistry is off the charts.  What will happen in the harsh light of day?  Can this star-crossed couple write their own happy ending, or will the circumstances force them to go their separate ways?

Just thinking about the possibility of his possession made her soaking wet.  He fastened the cuffs on her wrists and ankles and had her stand, facing the cross.  When he ordered her to spread her legs so that he could secure them, there was no hiding the scent of her arousal.

He drew his fingers up her leg as he rose, leaving a trail of gooseflesh in his wake.  He palmed her ass and slid his hand up her spine, past the scar on her low back to the base of her neck.  Tracing the line of her shoulders and arms, he grasped her wrists, put them where he wanted them, and fastened them to the cross, too.  Gathering her hair, he twisted it into a rope, brought it to her front, and tucked it between her breasts to help keep it there.

“I don’t know,” she said, feeling slightly panicked.  She should have chosen them before coming.  Now it was too late to be creative or clever.  “I can’t think of any.”

“Then let’s make it simple.  Yellow to slow, red to stop.  Just like driving.”

Master Sorin went into her bedroom’s en-suite and returned with wet washcloths and towels.  “Now, we can begin.  Have you ever worn a plug?” he asked.

She’d only done it with Cade, and he had to be persuaded to go there.  “It was okay.”

He grunted.  “We’ll start with the plug for now.  I’m going to check you.  I need to see how tight you are and what size plug you can handle.”

Lubricating his finger, he circled the ruched ring of her ass and pressed against it, gentle but insistent, until half of his finger was inside her.

“Give me a word,” he rumbled, testing her opening, judging how much he could give her, seeing how much more she could take.

“Lime,” she wheezed.  “Just…give me a minute, please, Master?  I need to relax my muscles, and the plug isn’t helping.”

Wiping his fingers clean on one of the washcloths, he started massaging the tension from her with those gifted hands of his.  Hands that helped.  Hands that healed.  Hands that had held countless lives in the balance and done their best to bring them through to the other side.

She wondered, when he’d lost a battle, had he cried?

“And now, the flogger, for your pleasure and mine.  Keep your muscles relaxed and welcome it.  Here we go.”

He stepped back.  Immediately, her body missed his warmth, and she shivered.

“Breathe, dragă,” he reminded her.

He hadn’t meant for things to go this far, this fast.

Sebastian shoved aside the thought.  Ashley wanted this.  Wanted him.  Sooner or later, what did it matter?

Wetting himself on her juices, he notched his glans in her opening and pushed inside, not stopping until he had worked most of his length into her tight,wet hole.

He smiled to feel it.  Not every woman could handle nine inches.

Grasping her hips in a bruising grip, he began to pound into her, setting off a series of tiny orgasms that made her pussy gush, until her juices were running down her legs.  Keeping one hand on her hip, he wrapped his fingers around her shoulder and snapped his pelvis, driving into her and hitting her G-spot.  She came, hard, drenching them both with her juices.

“Yessss,” he grated.  Continuing to fuck her, he brought her up to her next orgasm and kept her there, hovering on the precipice, until she was begging for release and he was ready to join her.  He bit the base of her neck, twisted her nipple, and heaved inside, ripping a climax from her.  He came, filling the end of his condom while her deliciously snug walls spasmed around him, milking his length.

Before they’d met, he’d had his doubts.  When he had expressed them to Sir Piers, Replay’s Master Dom had assured him that he would find Ashley Slade a pleasant surprise.

Sir Piers was right, as always.  She was intelligent, curious, and very, very guarded.  She had old scars and fresher wounds that were far from healed.  She was fractured—but not broken.  A recovering addict with a back injury that would never go away, limiting her on what they could do.

He’d never had a fragile submissive.  The women he usually paired with on the RACK side of the resort could handle anything that he gave them and more.  Given her medical history, it was possible that Ashley could not support the weight of his body when he finally took her to bed.

He kissed the place where his teeth had marked her and licked the petal softness of her skin.  Still impaled on his cock, she moaned and pressed back, grinding against him.

“Green, Master Sorin.  Better than green.  That was amazing.”

A glance at the clock told him what he already knew.  There was no time for a bath.  A quick shower, dress, then they’d head back to wardrobe.

Taking hold of her shoulders, he turned her towards him and kissed her temple.  “Shower,” he said.  “Then dress.  If we don’t do anything else, we should make it to wardrobe with a few minutes to spare.”

Ashley rolled her shoulders and sighed.  “Too bad,” she said, her voice still husky with arousal.  “I love shower sex.  And bathtub sex.  Hot tub, swimming pool, ocean—just mention water, and I get wet.  Better Pavlov’s dog than Schrödinger’s cat, I suppose.”

Sebastian smiled.  If he wasn’t aware of her intelligence before, her casual use of scientific references would have clued him in.

He wasn’t looking for a permanent sub, and there was no way in hell that he could maintain anonymity with someone like her.  He had agreed to be her Dominant, knowing that this weekend was all that they could ever have.

“Shower only,” he growled.  “Tease me or try for more, and you’ll earn yourself a caning.”

“Yes, Master.”  She said the right words, but he glimpsed the brat in her eyes, clearly itching to disobey.