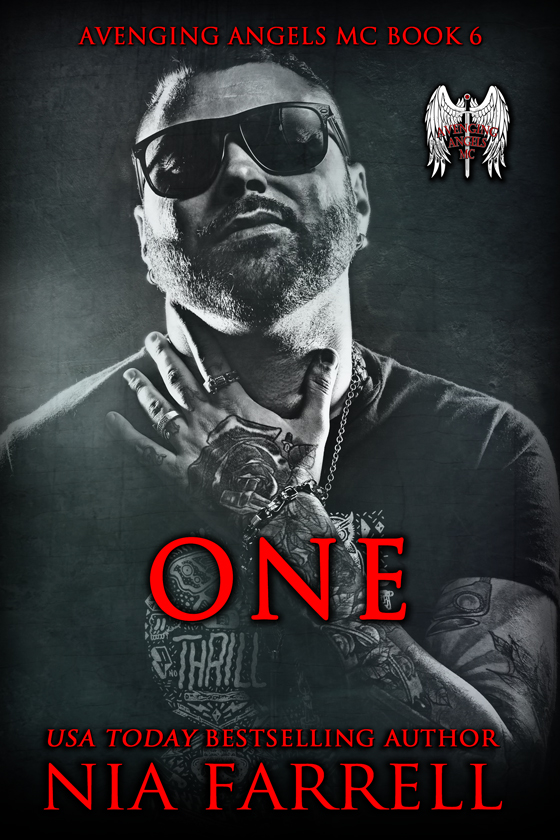 Jolene Chaisson (aka Sweet Thang) is something of a mystery. The Cajun beauty clearly comes from a privileged background, but no one knows what brought the young Louisiana woman to Illinois or how she ended up a sweetbutt in the Avenging Angels clubhouse.

To the club Enforcers Beast and Hawk, Sweet Thang is the woman they want but have never had. Even though she’s slept her way through most of the club’s single members, she’s avoided them, sensing they’re the most dangerous. When Beast and Hawk save her from being abducted and circumstances force them together, she realizes she’s never felt safer than in their arms.

But being with the Avenging Angels makes her a target for their enemies. Can Hawk and Beast protect her when Reaper reappears?

Beast watched the shifting look in Jolene’s whiskey eyes morph from surprise to trepidation to steely resolve. She was a brave one. He’d give her that.

“Here. Let me help,” Beast murmured, advancing slowly so that he didn’t set off any triggers. She might not remember what happened at the bar, but he fucking guaranteed her subconscious mind had recorded it all. “You need to be in bed until that shit is out of your system. Come on now, Sweet Thang. Can you stand for me?”

She planted a palm on the concrete vanity top and tried valiantly to push herself to her feet. Seeing the trouble she was having, Beast stepped in and took over. Lifting her in his arms, he carried her back to his bed, settling her in the center of the California king-sized mattress.

Grateful that she accepted his help rather than fight him, he piled pillows behind her back and pulled the top sheet over her lap, regretfully covering those killer legs of hers.

Breathing a soft sigh of relief when Hawk stepped back into the room, she bit her lip and kept her eyes downcast, refusing to look at either of them. Pride or prejudice? Beast wondered. After getting off to an unfortunate start, he was hoping that last night might turn things around. If she’d only talk to him…, give him a chance and get to know him, she’d learn that she could trust him to take care of her. Be her champion when she needed one and her Dominant as soon as he could get her to agree to a play session with him.

“I’m gonna get you some water,” he told her. “You need to drink. Hydrate. It’ll help get you back on track sooner.”

He hoped so, anyway, figuring it was a reasonable assumption. Jolene must have thought so, too, because she didn’t argue, just accepted the plastic tumbler he filled in the bathroom and pressed into her hands.

“When you’re ready, we need you to tell us about last night,” Hawk reminded her. “Everything you can remember.”

She cleared her throat, gripping the tumbler and holding it against her chest. “There was a band,” she began slowly. “It was crowded. I got a drink at the bar and was looking for a table when this guy saw me. He bought us both drinks and invited me to sit with him and his friends, Lyle, Red, and Buck. The other three were rodeo riders. Abe—the one who bought me a drink—was a clown.”

“A clown?” Beast asked, making sure he’d heard her right.

Jolene shuddered. “Nothing funny about him,” she chuffed. “I was on my second drink when I started feeling strange. I don’t remember anything after that.”

“Clothes off, little girl.  Time for your bath.”

Jolene hesitated a beat before obeying.  Reaching down, she peeled off her hose and shrugged off her sheer robe, making a bundle and setting it by the black lace thong on one side of the sink.  Looking up, she met his gaze in the mirror and nervously bit her lip.

“What?” he asked, wondering what the hell was going on.  Why was she dragging her heels?

“The plug.”  She whispered the words like she was confessing her dirtiest, darkest secret.  “It’s still in.”

Beast dropped his gaze to the jeweled end winking in the incandescent light.  Hawk had said to leave it until she had to bathe or void, but he wasn’t here to remove it.

“Stay there,” he ordered.  Grabbing a spare roll of toilet tissue from beneath the sink, he tore off a section and laid it on the counter.  Pressing his left palm against the small of her back, he grasped the plug with his right hand, worked it in and out, and twisted it free, laying it on the tissue.  Her hole was slow to close but looked fine.

It was too damn tempting for an ass man like him.  Any notion that he could keep this impersonal shattered like broken fetters, allowing his erection to rise without impediments.

Spreading his fingers, he put his hand over the curve of her caned bottom and squeezed.

Moaning with pleasure, their Cajun painslut arched her spine and pushed back into his touch.  Between the swollen folds of her shaved pussy, her dewy slit glistened, her juices escaping to track down her thighs.  The air was thick with her musk.

Just how far would she let him go?

He humped her crack, letting her feel just how hard he was for her.  The friction made her gasp and push her hips back to grind against him.

“Or I could take you here,” he rumbled.  “Keep you bent just like this and fuck that hungry hole of yours.  Stick my dick in your ass, fill you up, and ream you out.”

Her only response was heavy breathing and the look of desperation when their eyes met in the mirror.

Reaching for the bottom of his boxers, Beast pushed up the hem, pulled his erection out of the leg opening, and stroked it with his hand.  The vanity drawer had the lubricant and condoms he would need.  Taking out both, he ripped open a foil packet and pulled the prophylactic from its pouch.

Wrapping up, he lubed his length and wiped the excess in her crack, teasing her bunghole before dipping a finger inside.  “Safeword if you need to,” he told her, “but ten inches is coming your way.”

Jolene went still, forcing herself to relax.  Notching his glans in her hoop, Beast gripped her hips and tilted his pelvis, sinking his length into her inch by incredible inch.  She panted softly, sucking air between her teeth and pushing it out, gasping when he reached around and pinched her tit.  Keeping hold of the pebbled tip, he twisted and pulled it brutally, making her even wetter.

“I wish like hell I had clamps,” he rasped in her ear and bit it.  Sliding his hand south, he pushed his fingers into her groin and found her pleasure button.  “I’d make you stand straight and watch in the mirror while I played with your clit, tortured your nipples, and fucked your ass.”

Jolene went still for a moment.  Exhaling softly, she straightened her arms and pushed off the vanity, pressing her back against his front in silent invitation.

Beast felt a bolt of lust strike straight to his core.  “You sure you’re ready for this?” he asked, giving her one last chance before things got intense.

“I don’t know,” she answered honestly.  “But I’m tired of watching and wondering what it feels like when you fuck the other sweetbutts.”  She caught her lower lips between her teeth and searched his gaze.  When she released it, her mouth was set, and her whiskey eyes were lit with determination.  “I would like to be able to walk when we’re done.”

Beast pulled out an inch and pushed in deeper.  “Little girl, I had to carry you in here,” he reminded her.  “Do you really expect to walk out?”

One thought on “ONE (Avenging Angels MC Book 6)”